Video poker is a casino game that pays out close to 100% of wagers. By following a basic strategy, you can stretch out your play significantly.

Video Poker became a staple in casinos as soon as it was possible to take the popular Draw Poker casino game and put it onto a Computer backend. Players might be intimidated in a crowd with a live dealer but here, they have their very own machine, all to themselves. The basic game is Jacks or Better and, as the name suggests, a pair of Jacks or better generates the lowest paying hands. Players have learned that the casinos can change the odds by changing the paytables. Most players now look for a "Full Pay" game which is recognised by Full House paying 9:1 and a Flush paying 6:1. Look at the table below and take careful note of the EXTRA reward for a Royal Flush if you bet the maximum. The only way to really get close to a 100% game is if you take advantage of this benefit. Rather play with lower denominations. Always try pay the maximum coins.

The are many offshoots from this base game. You get variants where Deuces (twos) are wild, where you get Jokers in the pack, and where certain elements of the paytable are emphasized at the expense of others (like paying extra for Four of a Kind but less for Pairs and so forth). If you are in a hurry to win or lose, you can also play the multi hand games where as many as 100 hands are dealt out simultaneously.

Video poker machines are programmed to pay-out close to 100% when players play at the expert level. Playing video poker is easy. Once you’ve placed your bet, one to five coins, you get your initial five cards dealt. From the five cards dealt you determine which, if any, you wish to retain. After selecting the cards you wish to keep, you draw to obtain your final hand. Once all your cards have been dealt the video poker machine will recognize the ranking of your final hand value and pay you accordingly, or keep your money if you lose. The best way to play perfect strategy is to perhaps play the Microgaming variants. They have a built in strategy engine that suggest the right cards to hold. Amazingly, most players choose to ignore the advice from time to time and, although they sometimes win, in the long run they reduced the winning odds and gave their money to the casino.

The following Strategy Card is extremely general. Each game should have its own specific rules. Some lucrative paylines will alter the traditional logic as you go in pursuit of an unusually high payout at the expense of a low payout.

This is Jacks or Better Video Poker, in this case Playtech software as seen at Golden Palace Casino. 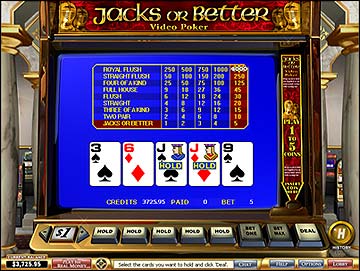